New Jersey's most Unusual Attractions For People looking for That Out Of The Ordinary, Offbeat Fun, Entertainment,  and/or Discovery and Education Experience

These unusual attractions have appeal to families, school teachers looking for a field trip to supplement their children's educational curriculum, and others who are looking for a different, never before seen experience. Grape Expectations
25E Kearney St.
Bridgewater, NJ
Create your own quality table wines with California grapes. Experience the enjoyment of a winery and theart of wine making. You will be involved in the complete process of wine making from the crushing and pressing of your grapes to the bottling of your oak-barreled, specially prepared wine.
732-764-WINE (9463)
Website Medieval Times Castle Dinner & Tournament
149 Polito Ave,
Lyndhurst
(201) 933-2220
Website
The most famous theme restaurant on the east coast. Great family jousting fun. Eat with your hands and drink from a Goblet as you watch some serious Jousting on Horseback. The imaginative new entertainment spot was based on the true medieval tradition of royal families inviting guests to a festival and feast to watch Knights compete on horseback. The Paul Robinson Observatory
Voorhees State Park
High Bridge, NJ
Located in Vorhees State Park, the 26-inch Newtonian reflector telescope is one of the largest privately owned telescopes in New Jersey. The public is invited to explore the night sky at sky watching programs that are offered year round by the New Jersey Astronomical Association. The Observatory is popular with families with kids
(908) 638-8500
Website Pequest Trout Hatchery and
Natural Resource Education Center
605 Pequest Rd.
Oxford, NJ
A Natural Resource Education Center for environmental education as well as the only state-owned and operated trout hatchery.See a video about the trout hatching process from conception to stocking. Experience a self-instructional tour that shows the trout rearing and an exhibit hall with live fish. Hiking trails and Picnic areas.
908-637-4125
Website . Sterling Hill Mine Tour & Museum
30 Plant Street
Ogdensburg, NJ
The mining museum features a 1,300-ft underground walking tour through the mine with the equipment in use while the mine was in operation. Also exhibits on the mining process including the 5,000 sq./ft. Zobel Exhibit Hall with over 20,000 mining related items, the miners lamp room, and the shaft station dating back to the 1830's.
973-209-7212
Website Akshardham - BAPS Shri Swaminarayan Mandir
112 N Main Street
Robbinsville, NJ
Website
A hidden Central Jersey cultural gem. The Swaminarayan Akshardham is a Hindu temple complex. This is a cutural experience of divinity, architecture, and humanitarian efforts. It serves as a place of understanding and appreciation of India art, culture and religion for generations to come. One of the largest Hindu temples in the USA, serving the Bochasanwasi Akshar Purushottam Sanstha (BAPS) branch of Hinduism. BAPS is a socio-spiritual Hindu organization established in 1907 that focuses on spirituality, family unity, cultural heritage, humanitarian services and child and youth development, Duke Farms
80 Route 206 South
Hillsborough, NJ 08844
Duke Farms is a tribute to environmental stewardship and showcases its natural, horticultural, and historic resources to inspire visitors to become informed stewards of the land. The estate is also home to four of New Jersey's largest trees, including two that are over 300 years old.
(908) 722-3700
Website

Fossil Hunting
Big Brook Preserve
Hillsdale Road
Colts Neck, NJ
Big Brook Preserve is an unusual find being one of the few sites to discover fossils in the Eastern, U.S. The Preserve is known for having a good chance of finding sharks teeth and other marine specimens fossils of both the Cretaceous and Pleistocene ages. Free parking is available in the lot on Hillsdale Road or along Laurelwood Drive.
732-780-6666
Website Insectropolis
1761 Lakewood Road
Toms River, NJ
Visitors to Insectropolis can view thousands of beautiful and bizarre exotic insects from all over the world. You can interact with touch-screen computer games, hands-on exhibits, live anthropods and other insect displays, and more!
(732) 349-7090
Website

Jersey Shore Pirates
Riverfront Marina
Princeton Avenue (next to Windward Beach Park)
Brick NJ
You will get to dress-up like pirates, get face painted, and learn some pirate lingo before setting sail for a pirate adventure. They will learn the rules of the Sea Gypsy pirate ship, read a treasure map, discover a secret message in a bottle, and work as a team to defeat the enemy pirate who has stolen the keys to their treasure.
(732) 899-6100
Website 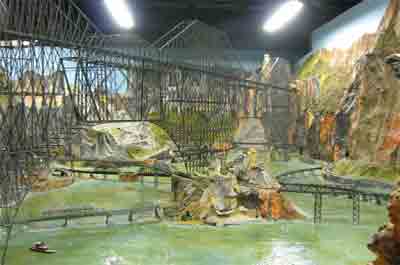 Northlandz
495 Highway 202 South
Flemington, NJ
It's the world's largest model railroad, The Great American Railway. They have over a hundred miniature trains and eight miles of track running past mountains and bridges. Rride the Raritan River steam Railway replica, and visit the ninety four room doll house with many features of real life mansions.
(908) 782-4022
Website

SeaQuest
250 Woodbridge Center Dr
Woodbridge Township, NJ
Website
732-283-2945
Admission: Ages 2-11 - $11.95; Adult admssion 12+ -$17.95: 55plus/military/student - $14.95
SeaQuest houses a wide variety of land animals, sea creatures, and reptiles. Here, you can snorkel with stingrays, interact with sloths and otters, have a rejuvenating spa session with fish, and experience other animal exhibits. And, kids, you may even meet a mermaid. Getting into tropical waters to snorkel with stingrays, sharks and tropical fish is an amazing experience that you can enjoy. The waters are approximately 70 to 76 degrees, and they provide the wetsuit and snorkeling gear. 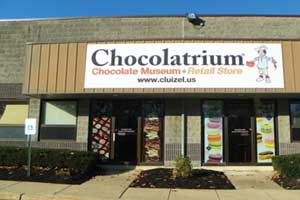 Cluizel's Chocolate Museum & Store
Cooper Run Executive Park
575 Route 73 North, Building D
West Berlin NJ
A chocolate museum, factory, and a retail store offering factory tours and interactive activities. Here you will learn about the history of chocolate and experience their chocolate making process. You will also get to participate in a a fun and tasty inter-active experiences Appointment only.
856-486-9292
Website 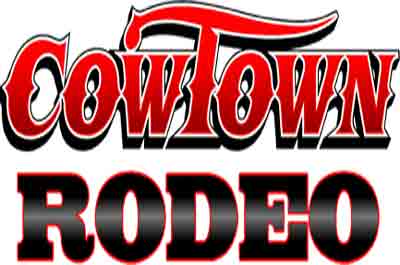 Delsea Drive-in Theatre
2203 South Delsea Drive
Vineland, NJ
Website
856-696-0011
info@delseadrive-in.net
Seasonal, open from March until October.
This is a nostalgic trip back to another era that has great appeal to families looking for an unusual, entertaining attraction at an affordable price. It's New Jersey's only operational Drive-in theatre. New Jersey has a unique history associated with drive-in theatres. They were invented here with the first drive-in theatre opened by Richard Hollingshead Jr. in Pennsauken, New Jersey, on June 6, 1933. The Delsea Drive-In was first opened in 1949, closed in 1987, and later purchased, updated, and reopened in 2004 by Dr. John DeLeonardis.
The main screen remained from the original property with a second screen added along with modernization of the snack bar and the projection equipment, replacing the original 35mm movie projector with a modern digital system.
Every evening features at least two films, sometimes three, for the price of one ticket per guest. The concession stand offers an an upgraded menu with a large variety of popular items. Because of the low cost of ticket sales, it's the food sales that cover the majority of the expenses needed to run the operration. 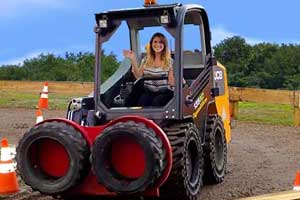 Diggerland USA
100 Pinedge Drive
West Berlin, NJ 08091
A construction themed adventure park where children and families can drive, ride and operate actual machinery. Each machine has been engineered for safety allowing children as small as 36" to operate with little or no instruction.
(856) 768- 1110
Website Palace of Depression
265 S. Mill Rd.
Vineland, NJ
Website
Contact: ThePalaceofDepression@Comcast.net
The Palace was a home built by George Daynor in 1929 during the Great Depression. Daynor claimed to be a Goldminer from the Alaskan Gold Rush who had later lost all his money in the stock market crash. Daynor came to Vineland with his last $4 to his name and bought 4 acres of land sight unseen for $1 an acre. When he arrived at his land he found it to be a swamp laden automobile junkyard. Daynor had a dream in which he claimed an Angel appeared to him. In this dream the Angel told him everything he needed to build his home was there and to build it with 18 spires for the Angels to land upon and perch. Daynor, using mud and clay and various automotive parts strewn across the junkyard, he built his home, a fantastic 18 spired castle. He drained the swamp and landscaped the grounds and his castle became known as "The Palace of Depression." Over the past 19 years the Palace has been rebuilt and an adjacent Museum/ Historical Center was erected on the property. Reconstruction is still underway, and until the project is completed, the Palace is currently open for tours in limited capacity. Roebling Museum
100 2nd Avenue
Roebling, NJ
(609) 499-7200
Website
Here you can learn about the town that helped build some of America's most famous bridges! Roebling Museum tells the story of the origins and growth of Roebling, NJ, a company town built by John A. Roebling's Sons Company. Some of the most important technological achievements of the industrial age such as big bridges, telegraphs and telephones, electrification, deep mines, big ships, elevators and airplanes as well as everyday objects were built in Roebling. Here, ideas and diverse cultures were exchanged through work and the interactions of these communities changed the cultural and industrial landscape of New Jersey.
Since opening their doors in 2010, Roebling Museum has offered a dynamic slate of programs, exhibits, and tours that emphasize and celebrate the experiences of those who lived in Roebling and worked for the John A. Roebling's Join us at the Indoor City of FUN. Enjoy NEW rides & attractions, laser tag, go-karts, New Jersey's largest indoor arcade and MORE!
See all we have to offer