Being a small state with a big appetite for food, it is not surprising that there are many recipe preparations and ingredients that have emerged over time in this state.

New Jersey, also called the Garden State, does not come by this name by accident, having established a prized reputation for it's blueberries, tomatoes, corn, cranberries, and peaches.

Because of the limited land available for farm production, New Jersey farms are generally small family run operations with a niche for higher quality, tastier, more costly cultivation methods than the large commercial farms in other states.

Most New Jersey farms sell their produce within the state and/or directly to the consumer in their road side stands.

These are the foods that are enjoyed by New Jersey residents and are either widely available or are known for their exceptional quality or taste.

These are also the foods that ex-Jerseyans who have moved outside the state are no longer able to obtain and have a nostalgic longing for.

Jersey Blueberries - The Official State Fruit of New Jersey, the New Jersey grown blueberry ranks first as the largest producer, and second in the country in acres harvested. While New Jersey blueberries are loved for their taste and freshness, they are also sought after to make delicious pancakes and cobblers.

The blueberry picking season begins in late June in Southern NJ and runs into late August through the state.
Learn more

Jersey Peaches - Jersey peaches are extremely tasty and succulent and sought after because they can be left to ripen on the tree longer than those farmed in other areas of the country. As with other Jersey grown crops, many of these peach farms have pick your own crops and roadside stands that bring just picked, fresh peaches directly to the consumer. New Jersey ranks 4th in the U.S. in the production of peaches. Harvesting is done by hand, usually starting in mid July for early cultivars, and continuing through September for late cultivars.  Peach picking season begins in early July and runs to the middle of September, depending on varieties and weather conditions.
Learn more

Jersey Tomatoes - As a result of not having to compete with the large commercial farms in other states who cultivate tasteless tomatoes by picking them green to withstand long periods of transport and storage, New Jersey farmers are able to cultivate varieties of that are stake grown to protect it from soil borne diseases, and picked when soft and vine ripened for immediate sale to the local markets and farm stands for the enjoyment of New Jersey consumers. If you are looking for that great New Jersey tomato taste, you can either go to a local farm market in New Jersey or grow your own. The season for purchasing or growing ripened tomatoes is mid-July to the end of September.
Learn more 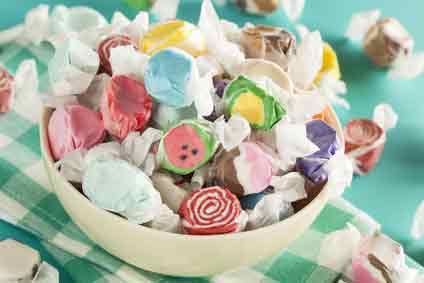 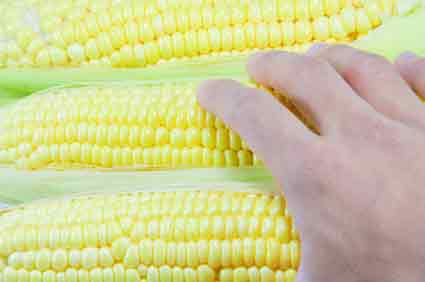 Jersey Sweet White Corn - Sweet Corn is a delicacy found at the many farm stands that spring up every year along the highways and back roads of North Jersey. The extra sweet taste comes from the sweet corn varieties grown on New Jersey's small farms that do not turn the sugar into starch during growth. Unlike most of the other states with large commercial farms that grow yellow dent corn for livestock or for commercial sale, they produce a corn with a high starch content and little sweetness. Sweet corn needs a fertile, well-drained, moist soil. New Jersey's clay loam is ideal for sweet corn. Farm stands selling fresh sweet corn can be found through out the state during the season, beginning around July first and continuing up to early October. Jersey Taylor Ham or Pork Roll - Taylor ham is the common name for pork roll, a food developed by John Taylor of Trenton, NJ. The pork roll is a sausage-like meat product available in and around New Jersey. In North Jersey it's called Taylor Ham and in South Jersey it's generally called the Pork roll. It's generally eaten sliced and grilled, like Canadian bacon as part of a breakfast sandwich on a hard roll and usually with egg and cheese. Jersey Hot Dogs - There is strong evidence that New Jersey can claim it is the "hot dog capital of the world". If not all of New Jersey, than certainly northeast New Jersey which has claim to the origin of several popular versions of the hot dog and home to some of the top hot dog manufactures in the country.
Learn more
instagramtwitterfacebookcustompinterest