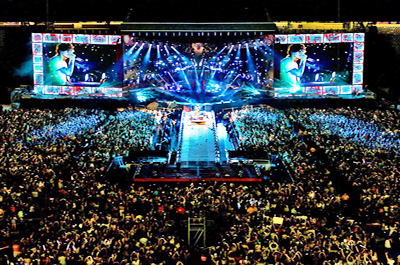 New Jersey concert and sports venues are exceptional in the caliber of the entertainment they attract and are located in virtually every corner of the state.

At any time of the year, you can find top rate entertainment somewhere in New Jersey within driving distance of where you are staying. MetLife Stadium
102 Route 120
East Rutherford, NJ 07073
201-460-4370
Tickets
The home of New York Jets and New York Giants also serves as the must stop location for all marquee events. Whether it's internationally broadcast concerts, storied college football programs, international soccer, MetLife Stadium is the ideal venue for fans and talent alike. With seating for 82, 000, MetLife Stadium has become the new standard of what a venue should look and feel like. New Jersey Performing Arts Center
1 Center St
Newark, NJ 07102
(973) 642-2002
Tickets
An internationally acclaimed concert hall hosting top artists national and international artists and symphonies. The complex consists of the 2,750-seat Prudential Hall and the 514-seat Victoria Theater filled with some of the world's most cherished orchestral, dance, theater, and instrumental works, as well as the best performers from New Jersey's outstanding array of artists and performing companies. Check out the Restaurants in Newark near NJPAC. Prudential Center
744 Broad Street, 11th Floor
Newark, NJ
(973) 854-8760
Tickets
The Prudential Center is the newest major New Jersey concert Center and host to NHL New Jersey Devils hockey, Seton Hall basketball, MISL indoor soccer, concerts, family shows, special events as well as other professional, collegiate and amateur sporting events. It has a Capacity of 17,625 for hockey, 18,500 for basketball, 19,500+ for concerts Located in downtown Newark, just a couple of blocks from Newark Penn Station. The arena is accessible via New Jersey Transit, PATH and Amtrak. Bounded by Edison Place to the north, Lafayette Street to the south, Mulberry Street to the east and Broad Street and City Hall to the west Red Bull Arena
600 Cape May Street
Harrison, NJ 07029
Tickets
Red Bull Arena has quickly established itself as one of the finest soccer facilities in North America. In addition to New York Red Bulls matches, the Arena has hosted a number of international, NCAA, and high school soccer games. The Arena houses 25,000 seats, including 30 Luxury Sky boxes and 1,000 Club Seats. IPlay America Event Center
106 Schanck Road
Freehold, NJ
Website
Offering a multitude of music genres to engage every audience,IPlay boasts a state-of-the art sound and light system, a variety of floor setups and flexible seating to accommodate all. The venue’s pristine production quality allows for superstar stadium acts to play a more intimate show for their fans without compromising the level of sound or performance. PNC Arts Center
Exit 116 Garden State Parkway
Holmdel, NJ
732.203.2500
Tickets
A modern amphitheater with a capacity of 17,500. There are 7,000 seats and the grass area can hold about 10,500 people. Concerts run from May through September featuring 35–45 different events of many types of musical styles. It is ranked among the top five most successful amphitheaters in the country, and one of two major outdoor arenas in New Jersey. Cure Insurance Arena
81 Hamilton Ave
Trenton, NJ
1-800-298-4200
Tickets
The Arena seats approximately 8,100 for hockey and other ice events, 9,000 for basketball, and up to 10,000 for concerts, family shows, and other events. The facility has 1,150 private club seats as well as 34 private luxury suites and is the largest arena in Southern New Jersey. It hosts many events including hockey, basketball, concerts, ice shows, athletic events, family shows, trade shows, and conventions. It is also the home of the 2005 Kelly Cup Champion Trenton Titans of the East Coast Hockey League. Freedom Mortgage Pavilion
1 Harbor Blvd
Camden, NJ
Tickets
With a view of the Philadelphia skyline, this dual purpose venue serves as an outdoor amphitheater in the summer with a capacity of 25,000, including lawn seating. In winter, it is converted into an enclosed, flexible capacity theatre. It brings to you the world's best performers. During the fall and winter months the pavilion transforms into an enclosed, climate-controlled, 1,600–7,000 seat theater featuring concerts, Broadway productions and family-friendly entertainment. Ocean City Music Pier
Ocean City, NJ
609-399-6111
Tickets
The Music Pier is an entertainment venue suitable for a great variety of shows from stand up comedy to musicals, and from soloists to the Ocean City Pops orchestra. The Ocean City Pops has a summer concert series from July through October that
showcases the beautiful music of the orchestra as well as special guest appearances from critically acclaimed entertainers. Tropicana Showroom
2831 Boardwalk
Atlantic City, NJ
(800) 843-8767
Tickets
The Tropicana Showroom is a Broadway-style theatre with 2,000 seats. It features some of the best traveling entertainment around, including world-class headliners, revues, sporting events, and Broadway productions. With a great sound system, automated lighting, and exceptionally comfortable plush seats, Minor league baseball has become more than just being a "farm System" or a system that develops and grooms players for the Major Leagues. It is also a very popular and affordable entertainment center of family fun.
Learn more New Jersey Auto Racing tracks include the National Hot Rod Association (NHRA) member tracks that host Top Fuel, Funny Car, and Pro Stock car races.
Many of these tracks have "Drive your own" races from beginners to pros.
Learn More